Dear Readers, in thus Article I provide all upcoming Cyclone list in a single Table and also the name  of cyclone given by which countries which is most important General Knowledge topic for all  competitive examination like Railway NTPC, Group-D, SSC, State PSU, Banking etc

For more knowledge and PDF connect with us : Join Telegram Group

Cyclone name given by

The name of the cyclone in the world is given by the Member countries of different Meteorological departments and Organization all over the world. The naming of Tropical cyclones in the Indian Ocean region given by 8 pannel member countries  (India, Pakistan, Sri Lanka, Bangladesh, Maldives, Myanmar, Oman, and Thailand).

Classification of Cyclone according to Speed:

Cyclones are mainly of two types according to Area:-

For More Details Read the link The cyclone in World: Type of cyclone 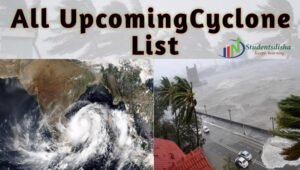 All upcoming cyclone names list are given below in Table.

List of Name of the cyclone in the Northern Indian Ocean

The naming of the cyclones over the north Indian Ocean given by 13 countries from 2020 after Amphan starting with Nisarga, then Gati, Nivar, Burevi, Tauktae etc

Who gave the name of Cyclone Asani ?

The name of the cyclone “Asani ” has been given by Sri Lanka Country.