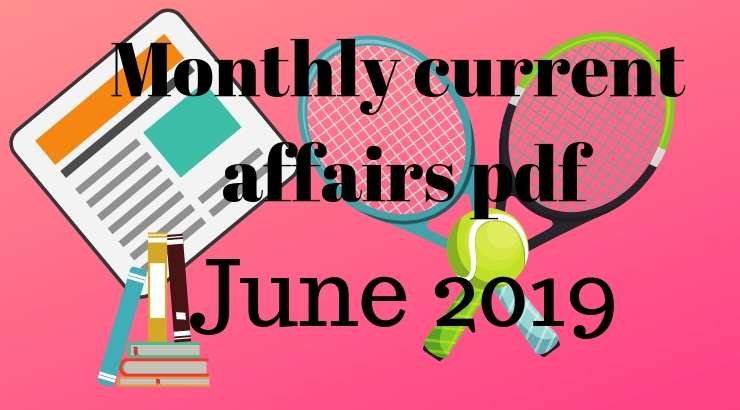 Dear Aspirants here we provide Monthly Current Affairs of June 2019 including Important Days with their Theme, Summit  and Conference  ,New Appointments in various post, Awards & Honors, Books ,Sports, MoU  and Agreement, Committee ,Obituaries and National & International News. These are collected from all newspapers  and Internet .which have unique updates of all daily events from. It helps aspirants for SSC, Railway NTPC, JE, State PSU & all competitive exams. Happy Reading…

Free travel for Women in Delhi Buses, Metro for “Safety”

Canada to ban single-use plastics by 2021

For elephants, a water clinic opens in Mathura

India to launch the first solar mission in 2020

You can read also:-Union Budget 2019 Highlights

WHO launches  a new tool “AWaRe”

In this Article, we provide a monthly current affairs pdf June 2019 which contains examination oriented important current event of different sessions like important observation day, sports, Awards, Book and author, Mov and obituaries, etc. please go through once this article and leave your comments in comments session below.

You can Read also