The Oscars Award 2022  also known as the 94th Academy Awards  presented by the Academy of Motion Picture Arts and Sciences (AMPAS) for best films released between March 1 and December 31, 2021.

94th Academy Awards were presented at the Dolby Theatre in Los Angeles, California. The nominations were announced on 27th March, 2022.

The ceremony was hosted by Regina Hall, Amy Schumer and Wanda Sykes. 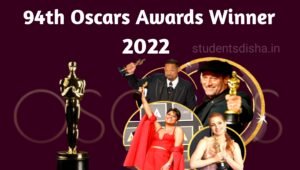