Dear Readers, in this article I provide an all-new list of Chief Minister and Governor of State and Union Territories till August 2022. Here is the Complete New CM and Governor list 2022 PDF of all 28 States and 9 Union Territories of India 2022 which are important Current Affairs GK and helps the aspirants for SSC, RRB NTPC, State PSU, and all competitive examinations.

For Any Study PDF & Notification join with us in Telegram : Join Telegram Group 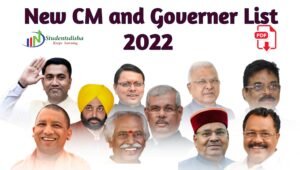 Other Important Current Affairs GK are :

India is a ‘Union of States’. According to Article 164 of the Indian Constitution, the Chief Minister shall be appointed by the Governor.

2022 New list of CM and Governor are given below: